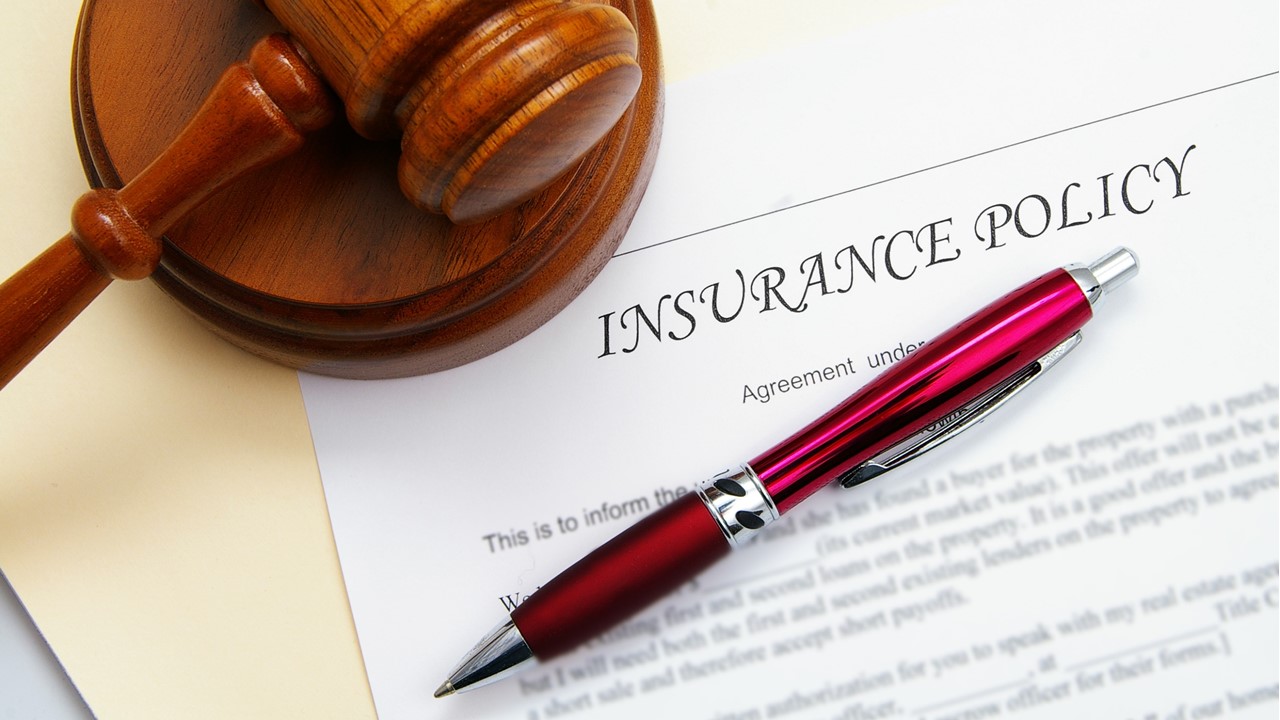 In the recent Haydaw v Farm Bureau Ins Co decision, the Michigan Court of Appeals examined the question of whether statements made during litigation after the insured’s claim has been denied is grounds to void an insurance policy under a fraud or misrepresentation clause. The trial court held that plaintiff made false statements at his deposition and granted summary disposition in favor of Farm Bureau and plaintiff appealed. In this matter of first impression, the Court of Appeals overturned the trial court’s decision and held “that fraud provisions in no-fault policies do not provide grounds for rescission based upon false statements made by the insured during first-party litigation.” Haydaw v Farm Bureau Ins Co, _ Mich App_; _NW2d_; (2020)( Docket No. 345516).

This case arose out of a motor vehicle accident in which plaintiff claimed to have sustained injuries to his back, neck and shoulders. Plaintiff filed suit in October 2016 against defendant Farm Bureau alleging they wrongfully withheld personal injury protection (PIP) benefits due to plaintiff under his insurance policy. In February 2017, plaintiff signed authorizations releasing all of his medical records and he was deposed in April 2017. Plaintiff also underwent two insurance medical examinations in April 2017 and May 2017. Because English was not plaintiff’s first language, he testified and communicated with the physicians at the aforementioned medical examinations through an interpreter.

Farm Bureau moved for summary disposition after the completion of discovery on the grounds that plaintiff made false statements during discovery regarding his medical history thereby invoking the fraud provision of the claimed upon insurance policy. Plaintiff’s medical records revealed intermittent complaints of back, neck and shoulder pain and that he had been prescribed medication for the same in years prior to the accident. This notwithstanding, plaintiff testified at his deposition that he had only seen his primary care physician for the flu and been prescribed flu medication. Farm Bureau asserted that plaintiff also falsely represented his medical history during his insurance medical examinations following the accident by indicating he had not suffered from problems with his neck, back or shoulders before the motor vehicle accident. Accordingly, Farm Bureau argued they were entitled to summary disposition under the fraud provision of the policy and Bahri v IDS Prop Cas Ins Co, 308 Mich App 420; 864 NW2d 609 (2014).

Plaintiff maintained that he testified truthfully at his deposition. He indicated that he understood the questions at his deposition to be referring to his doctor visits immediately preceding the subject accident and that his last two doctor visits before the accident were in fact to address his having the flu. Plaintiff also argued that he disclosed his medical records prior to the deposition and therefore defendant was aware of his medical history and if plaintiff made any inaccurate statements at his deposition, the same should go to his credibility which should be determined by the trier of fact. Finally, plaintiff questioned the accuracy of the medical-examination reports considering he was communicating through an interpreter.

The Court of Appeals’ Examination of the Case

In examining the question at hand, the Court noted that this matter was previously addressed by the United States Supreme Court in Republic Fire Ins Co of North America v Weides, 81 U.S. 375, 382-383; 20 L Ed 894; 14 Wall 375 (1871). There, the Court held that testimony at trial does not implicate the fraud or false swearing clause in an insurance policy. The Supreme Court concluded “It is only fraudulent false swearing in furnishing the preliminary proofs, or in the examinations which the insurers have a right to require, that avoids the policies, and it was for the jury to determine whether that swearing was false and fraudulent.” Id.

The fraud and false swearing clause is one beneficial to the insurer and it reasonably extends to protect the insurer during the period of settlement or adjustment of the claim. When settlement fails and suit is filed, the parties no longer deal on the non-adversary level required by the fraud and false swearing clause. If the insurer denies liability and compels the insured to bring suit, the rights of the parties are fixed as of that time for it is assumed that the insurer, in good faith, then has sound reasons based upon the terms of the policy for denying the claim of the insured. To permit the insurer to await the testimony at trial to create a further ground for escape from its contractual obligation is inconsistent with the function the trial normally serves. It is at the trial that the insurer mustdisplay, not manufacture, its case. Certainly the courts do not condone perjury by an insured, and appropriate criminal action against such a perjurer is always available.

The Court in Haydaw went on to note that they agree with the vast majority of the courts have addressed the issue and determined that as a general rule, statements during litigation do not implicate a fraud or false swearing clause. The Haydaw Court further noted:

False statements made during discovery do not provide grounds to void the policy because, by that time, the claim has been denied and the parties are adversaries in litigation. Once suit is brought, what is truth and what is false is a matter for a jury or a judge acting as factfinder. And if it can be shown that a party intentionally testified falsely, it is up to the court to determine what, if any, sanction is proper…In any event, it is up to the trial court to determine whether a drastic sanction such as dismissal is warranted for discovery misconduct, including untruthful deposition testimony. To be clear, once an insurer fails to timely pay a claim and suit is filed, the parties’ duties of disclosure are governed by the rules of civil procedure, not the insurance policy.

Haydaw, supra at 7-8. The Court also acknowledged that allowing an insurance company to void a policy for statements made during litigation would create a perverse incentive such as allowing an insurer with full knowledge of an insured’s medical history to bait or lead an insured into making an inaccurate statement at deposition and then seek summary disposition on those grounds.

The Court further opined that to allow an insurer to prevail on summary disposition because of false statements made by plaintiff during the course of litigation would implicate the first-breach rule. More specifically, if the insurer’s denial of benefits was found to be unjustified, the same would be considered a substantial breach and plaintiff would then be relieved from his contractual duties under the policy.

This decision appears to be limited to statements made during the course of litigation after coverage has been denied and the same not invoking the fraud provision of the insurance policy. As such, the decision does not appear to have implications on false statements made prior to a lawsuit being filed, such as during the application for insurance or during the coverage investigation after an accident has occurred. In addition, it does not appear to limit fraud remedies traditionally available in matters where the injured party is uninsured as there would be no insurance policy at issues in such cases.  Moreover, we would argue that it does not apply in situations where a lawsuit was filed, but the claim has not yet been denied.

In light of this decision, insurance companies should work to complete thorough investigations immediately following receipt of a claim and identify possible fraud issues before a lawsuit is filed. Certainly, any denial of benefits will need to be supported by facts in existence prior to the commencement of litigation such as fraud or material misrepresentation in the application for insurance, false statements made during examinations under oath, matters arising out of surveillance, etc.

Case specific strategy and analysis will continue to be critical during the course of every insurance claim. Our experienced team of attorneys stands fully equipped and available to advise you during any stage of an insurance claim or the litigation process. To schedule a consultation contact us today! 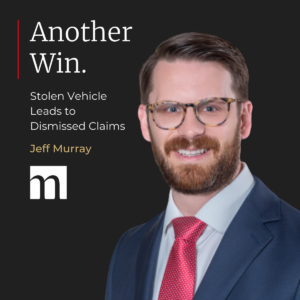 Jeff Murray secured an order dismissing plaintiff’s claims, with prejudice, on a motion for summary disposition. The underlying claimant had stolen her mother’s vehicle, gotten 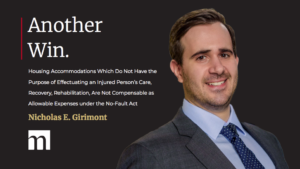 Nicholas E. Girimont wrote our motion for partial summary disposition as to the claims submitted by Residential Care Solutions, LLC (“RCS”) which was seeking $82,268.48

Magdich Law is seeking an associate attorney with 5 years of First- and Third-Party No-Fault Litigation experience. The ideal candidate must be able to: Handle 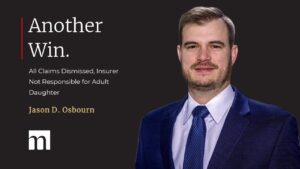 After reviewing a motion drafted by Jason D. Osbourn and the plaintiff’s opposing response, a District Court Judge has agreed that even though the daughter

Send us a Message

Fill out the form below to